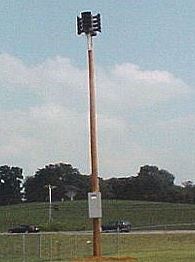 The City of Clarksville, with the assistance of a grant from the Tennessee Emergency Management Agency, completed the installation of an early warning siren system that contains 13 sirens. The purpose of the siren system is to give persons who are outdoors an early warning of impending situations such as:

When the siren sounds, the tone will be followed by a voice message that explains the warning sound. The siren system is not designed to be heard inside every home.

Sirens are located near each of the major city park and recreational areas and at schools where large numbers of persons might gather outdoors, such as stadiums and ball fields. Other units are located at fire stations. Future siren units will be placed to serve residential neighborhoods. 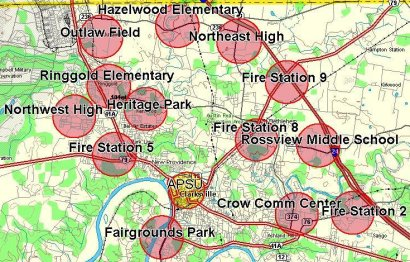 Weather radios in the Clarksville-Montgomery County area can be tuned to 162.5 for current weather conditions, alerts and warnings.

The tornado warning sound is a steady tone that means a tornado has been reported in our area. When you hear this sound, you should take cover immediately. There will be no all clear' given after a tornado warning has been issued. Listen to the Tornado Warning (WAV).

The Amber Alert is a messaging system that advises the community that a child is lost or missing. The alert tone is the EAS “burst” sound one hears on radio or TV when a weather announcement is about to be made. Amber Alert messages following the tone will be live announcements from the 911 Center.

A hazardous material spill warning sound usually means an accident has occurred allowing some liquid or gaseous substance to escape. The siren sound is a series of 'whoops'. If you hear this sound, go indoors and tune to your radio or TV for additional information about areas to avoid. Listen to the Hazardous Material Spill Warning (WAV).

The civil defense siren sound is a wavering high-low-high tone. It is similar to the siren sounds used by some police and fire sirens during a response call. When you hear this warning, you should go inside and listen to radio or TV broadcasts for further information. Listen to the Civil Defense Warning (WAV).

Each month, the siren system will be tested by playing the Westminster Chimes. This sound was selected so it would not be confused with an actual warning. The test will be scheduled at noon, the first Saturday of each month. Listen to the Monthly Test Sound (WAV).